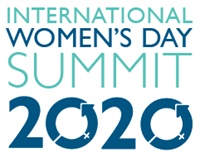 Celebrate International Women's Day with the CMBA and the Women in Law Section at our fifth annual CLE Summit. The over arching theme for the international celebration in 2020 will be “#EachforEqual."

As described by the global organizers, “Women's equality can't wait. It's going to take everyone to think and be inclusive - all the time, everywhere.”

Betsy was born and raised right here in Northeast Ohio. After graduating from Copley High School she went to Bowling Green State University where she earned her journalism degree and a minor in meteorology. She finished her remaining meteorology coursework through Mississippi State University. Betsy worked in Fort Wayne, Indiana, and Jacksonville, Florida before coming home in 2003. In 2008 she became Cleveland’s first female Chief Meteorologist.

Callista is the chief counsel of the National Aeronautics and Space Administration’s John H. Glenn Research Center in Cleveland. In this position, she provides her legal expert advice to Glenn’s center director and other senior leaders. She also manages Glenn’s Office of the Chief Counsel, a diverse legal staff that advises Glenn customers on a broad spectrum of federal matters including procurement, human capital management, equal employment opportunity ethics, intellectual property, fiscal, environmental, security, privacy and all other legal matters.

Samantha’s Background is in a drug discovery and development for retinal, neurological, and inflammatory disorders. At BioEnterprise, she works with a team of Executives in Residence to scout and support local NEO biotechnology companies and work with the leaders of these companies to drive scientific and economic growth in the region. As part of this initiative, Samantha serves as Director of Research and Alliance Manager at Convelo Therapeutics where she leads a team of scientists and manages Convelo’s strategic partnership with Genentech.

Ann is a partner at BakerHostetler LLP. She is a trusted advisor to business owners, board members, executives, in-house counsel and professional service providers. As a business attorney and certified public accountant with an M.B.A., Ann has the business perspective needed to assist with their strategic objectives. She focuses her practice on employee benefits and executive compensation. Ann is also Treasurer of the CMBA.

Sandy practiced law with the Columbus law firm, Vorys, Sater, Seymour and Pease LLp for 33 years, focusing on civil litigation. For three years, she was Associate Vice President and Deputy General Counsel at the Ohio State University Office of Legal Affairs. Now retired from the active practice of law, she focuses on community service. Currently chair of the board of Planned Parenthood of Greater Ohio, she also serves on the boards of the Ohio State Legal Services Association, the Matriots PAC, the Ohio University Foundation, and the Dublin Arts Council, among others. She served for 6 years on the Equality Ohio Education Fund board, including as chair. .

Lynn-Ann has spent her career in the financial arena. From investment banking to venture capital she has experience working with a wide range of companies, from start-ups to those in the fortune 1000. In 2001 she began working in venture capital, managing a small venture development fund with a mission to invest in tech-based start ups. Over the course of 12 years she and her team invested $30 M in 80 companies, all located in Northeast Ohio. She also runs her own consulting firm providing a variety of business services including management of a owmen’s angel network, financial analysis, market research, and advisory services to entrepreneurs sekking capital.

Judy of the law firm Simon, Peragine, Smith and Redfearn in New Orleans is president of the American Bar Association for the 2019-2020 bar year. Judy has served on numerous ABA groups, including as chair of the committee that evaluates nominees to the federal bench. She also has served as the aBA’s lead representative to the United Nations and as a member of the ABA Board of Governors and its executive committee.

SVP of Advancement, The Cleveland Foundation

As Senior Vice President of Advancement, Kaye has direct responsibility for all of the foundation’s fundraising activities. She leads the 18-member Advancement staff, with backgrounds in estate law, banking, wealth management, accounting and nonprofit leadership.

Anna is an entertainment lawyer, and represents a dicerse roster of clients in the music industry as well as literary artists, filmmakers, visual artists, performers, and performing arts organizations. Anna combines business and legal knowledge of the industry to offer comprehensive repreentation to entertainment professionals on matters pertaining to Copyright and Trademark; Clearance and Licensing Rights’ Formation of Business Entity; and Contracts.

In 2015, Alyson joined Greektown Casino-Hotel as its Assistant General Counsel. Less than a year later, she was promoted to Senior Labor & Employment Counsel for JACK Entertainment, providing day-to-day labor and employment advice to five gaming properties on 13 labor agreements and employment laws across three state.

Chief Legal and Ethics Officer of the Cleveland Metroparks

Being drawn to the concept of “good environment” in the tenth grade American Government class, Rose pursued a career in the public sector and has the privilege of serving as Chief Legal & Ethics Officer for Cleveland Metroparks, where she leads a talented legal team responsible for the Park District which includes close to 24,000 acres within 18 reservations, 8 golf courses, and the Cleveland Metroparks Zoo. Immediately prior to joining Cleveland Metroparks, Rose served as Director of Legal Affairs for the Alcohol, Drug Addiction and Mental Health Services Board and has served as an Assistant Prosecuting Attorney in Cuyahoga and Medina Counties.

Mayor Annette Blackwell is a very successful business professional who has worked at KeyBank in Installment Lending and University Hospitals of Cleveland as an Administrative Coordinator to the President and Chief Medical Officer of University Hospitals Primary Care Physician Services..

Justice Judith French became a justice of the Supreme Court of Ohio in January 2013 and was elected to her first term in 2014. She has traveled throughout Ohio, visiting all 88 counties many times. With a history of public service and wide ranging legal experience, a passion for equal justice, and  a special interest in civil education, Justice French is committed to serving  as a resource for the people of Ohio.

Betsy is currently a candidate for the Ohio state senate District 18 in Northeast Ohio. She ran a nationally recognized race for the U.S. Congress in 2018 raising $2.3 million and bringing the margin 20 points closer than previous races. She is an employment lawyer with erh own law firm, and previously worked as a Senior Counsel at the Cleveland Clinic.

As an executive who reported directly to the CEO for 19 years, Leila had a broad range of responsibilities in a highly complex and regulated industry, including operational P&L responsibility over a business with EBITDA approaching $1 billion, implementing a strategy designed to mitigate its earnings volatility, leading the strange strategic planning process.